The first World Cup race this season is over. I ended on 15th place on the longdistance race at Tahoe Donner. I had a very bad start and lost some time on the first to controls. With a bad routechoice on the first loop I was quite long behind. The second loop I skied totally alone and out on the last loop I was around 20th place. The long last loop I skied quite well and catched some places. Over all I am not satisfied with my race but the shape has improved a lot the last two weeks. I am optimistic for the coming races and specially for the European Championships in Ukraina in the end of february.
Results here

In the afternoon we had a relaxing classsic training at Royal Gorge, with some nice views. 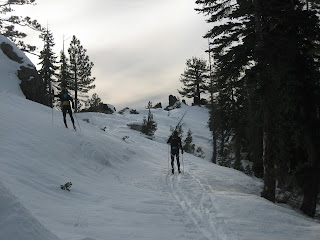 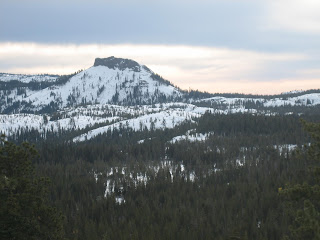 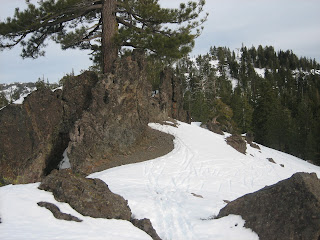 Yesterday we had some ski-o intervalls here in Kirkwood. Based on the GPS-tracking of the tracks, Hälge draw a map. We had 6 loops of 6-7min. Each of us skied 4-5 of the loops. Thanks to Hälge for the organisation. 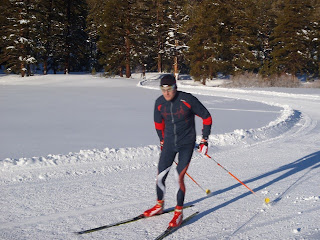 warming up for the intervalls 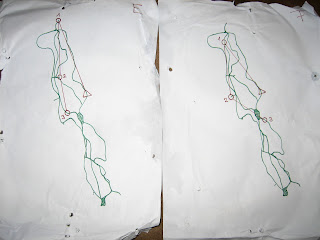 two of the loops
We will stay in Kirkwood until tomorrow. Then we will move to the Tahoe region and prepair for the first World Cup competition on monday.
Today Marte skied the 10k skate at the Norwegian Championships in Voss. She ended on 27th place in the race won by Astrid Jacobsen. On Sunday she will ski the last leg in the relay for Strindheim IL. You can follow the Norwegian Championships here.
Lagt inn av Chrigi H kl. 26.1.12 No comments:

Now we have spent the first three days in Kirkwood. The first day it was really little snow and only one km of skitracks with some stones, a lot of grass and water some places. Yesterday it was snowing heavily. We got about 40cm of snow. Today finally the conditions were good. Some degrees below zero, blue sky and enough snow. Now, in the middle of the day it is really warm, the snow on the trees is melting. We just hope that not too much snow is melting the coming days.
We are staying in Kirkwood until friday. Then we move the the Tahoe region. The worldcup starts with the long distance on monday 30.januar.

Here some impressions from todays training: 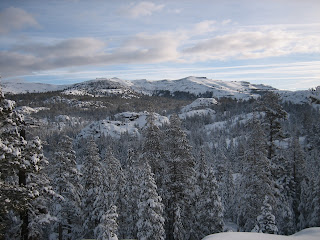 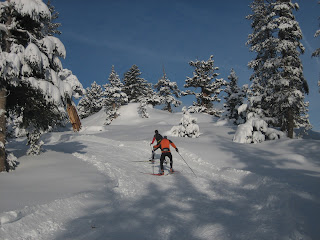 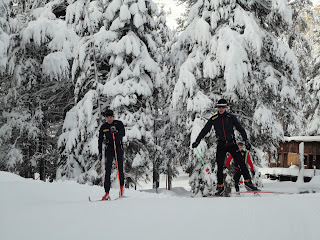 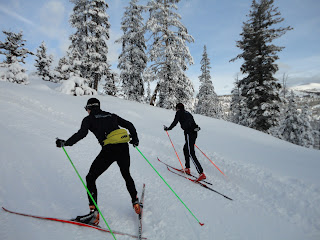 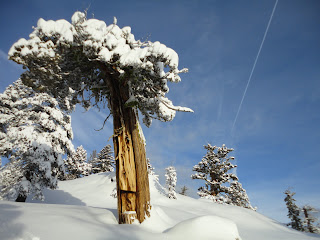 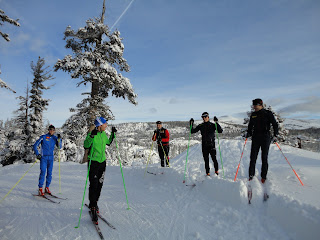 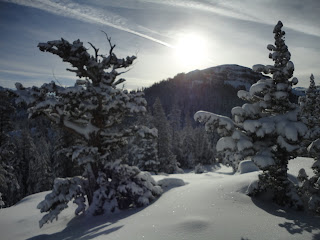 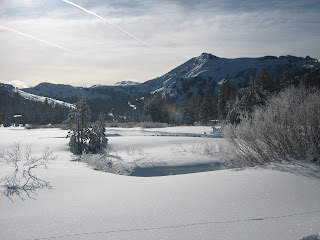 Much has happend since our last update.

Christmas we spent at Christians parents place in Switzerland. It was nice to finally meet all the family again. After to days in Dottikon we travelled to Silvaplana in the Engadin valley (with a stop in Davos on the way up and down) for some days of skiing. The conditions in Davos were perfect. A lot of snow and blue sky. In Engadin there was quite little snow. But we had some nice trainings around Pontresina. The training in high altitude was a good preparation for the worldcup in the USA for Christian. Beside the training we enjoied the good food in the grison-region and of course the company of Christians partents. 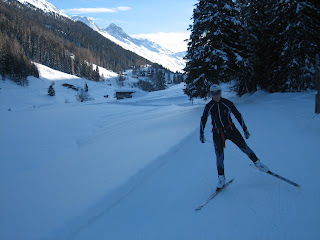 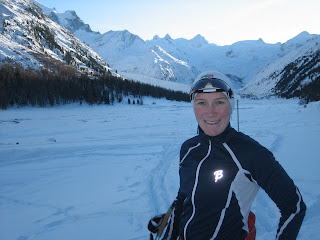 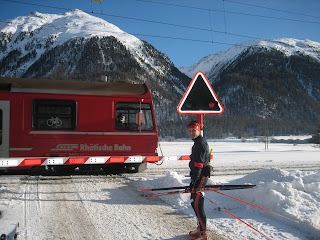 waiting for the train in Bever
At New Years Eve Martes Parents and Sigrid visited us in Trondheim. We had an nice Tapas dinner after some skiing earlier the same day. It's always nice to have visitors at our new home. 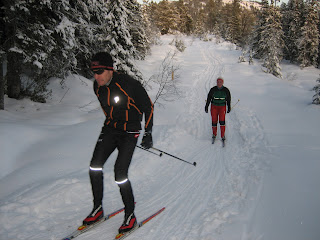 Sigrid and Christian skiing "Vårløypa"
The first weekend in January the competitons in Konnerud were cancelled due to lack of snow. We decided to travel to Östersund instead and compete in J-H-cup. It was a very good competiton. Thanks to Torgny for the organisation. We had both quite good races. The shape seems to get better.
The week after the norwegian champinships were held at Budor. It started with a very demanding (both physical and o-technical) long distance mass-start on Friday. Marte won with quite big margin. Christian started well bot lost a lot of time on the second half.
The middle distance on Saturday was much the same. Another gold for Marte and another bad day for Christian.
On Sunday the relay was held. We skiied as last year with Christian on the first, Marte on the second and Lars Moholdt on the last leg. Christian lost some time on the first leg, but we were still in contact with the other teams fighting for the medals. Marte skied well until the last control, which she forgot to punch. So we were disqualified after coming in as the second team.
All in all it was a good weekend for Marte, a bad for Christian, but it was good training for the rest of the season.
Results and some maps can be found on ski-o.com 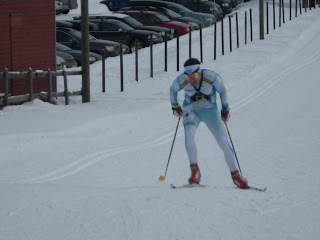 Christian on the last meters in the middle distance 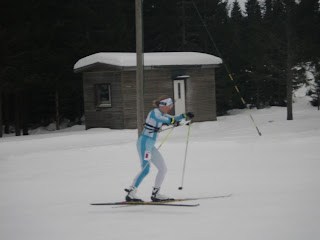 Marte starting her relay-leg
Now Marte is prepearing for the Norwegian championships in xc-skiing in Voss next weekend and Christian is on the way to the worldcup in Lake Tahoe.
Lagt inn av Chrigi H kl. 22.1.12 No comments:
Newer Posts Older Posts Home
Subscribe to: Posts (Atom)