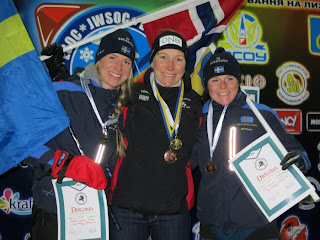 To day I won the middle distance in Sumi and defended my european champion title on the middle distance. After a big misstake in the sprint yesterday it felt really great to win to day!
To days race was demanding. It was tough physical and the course offered difficult route choices. I was satisfied with my race and very happy to win. Josefin Engström won silver, Kajsa Richardson bronze!
(Photo: Sindre Haverstad)
Lagt inn av Marte kl. 23.2.12 6 comments:

First race in Sumy to day, mixed sprint relay. A tough, tight race. Fun, but unfortunatley no great success for Christian or me.

I skied for Norway 1 together with Hans-Jørgen Kvaale ( read his blog here(Norwegian): Team Avancia). Our goal was to ski for a medal. We skied well on the first two legs and was fighting for a medal, then we got map trouble. Hans Jørgen got my map and started skiing the women 2nd leg. For the two first controls the course was the same as for men, then the other men skied in another direction. He understood something was wrong, saw that his map was marked women and decided to try ski with Staffan, it was a 50/50 chance that they had the same forking, he also puched all the controls in the womens relay on his way. However the jury had seen him taking my map and gave me a mens map. So in all we skied 4 times mens leg and 2 times womens leg. Unfortunatley I also lost focus and did a few misstakes and we only managed a 20th place.

Christian skied in the Swiss 3rd team, they had no big hopes for to day, finished 33rd. More important for them was to get to know the tracks and terrain a bit and to get good competition training.

Today we skied the last individual competition of this World Cup round, a middle distance at Tahoe XC.
I started quite well but to the 4th control I had a mistake while cutting. Because of this I lost all my selv-confidence. And the rest of the race was just bad. A lot of bad routechoices because I didn't dare to cut and a lot of small mistakes. This resulted in a 16th or 17th place depending on which resultlist is correct.

For me the World Cup Round 1 is over. I will not ski the mixed sprint-relay tomorrow. Now all the focus is on the European Champinships in Sumy, Ukraine from February 21st to 26th. After this week I am quite optimistic. My shape improved a lot the last three weeks. Now I have to work with the map-reading and doublepoling. I am really looking forward to the races in the Ukraine.
Lagt inn av Chrigi H kl. 3.2.12 1 comment:

Today the World Cup Sprint at Auburn Ski Club on the Donner Pass was held. It was a very hard sprint on 2200m asl on only skating-tracks. The new snow falling over night made it even harder. I had a race without mistakes and even if it felt bad physically, I think it was not too bad. My 10th place is my first ever top 10 result in the World Cup, after 16 years.
Congratulations to Carmen for her 4th place, the best ever swiss result in a World Cup race.

on the way to the last control (Photo: Carmen Strub) 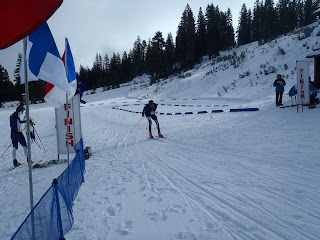